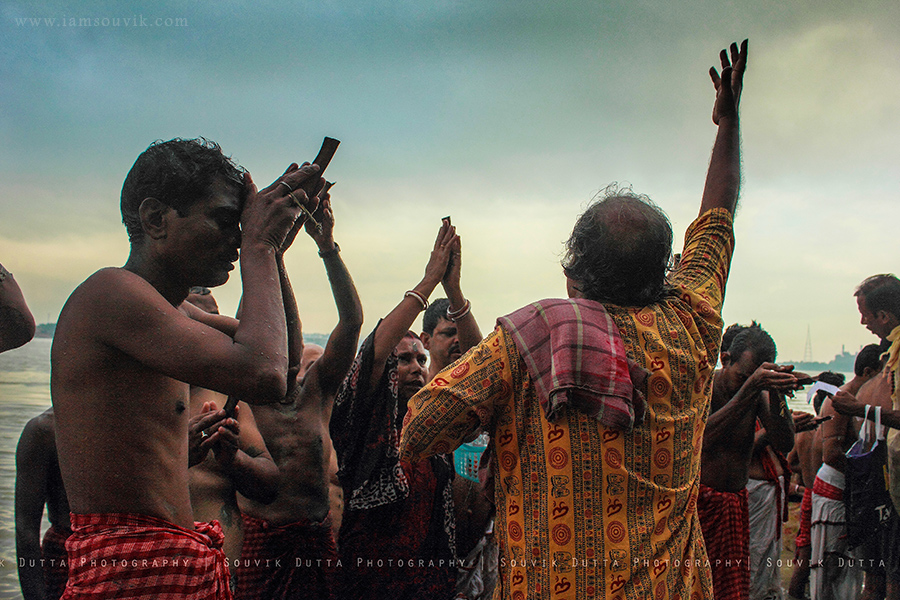 Mahalaya & Torpon – The Colors of Arrival

Waking up in the break of dawn to the legendary voice of Birendra Krishna Bhadra as every radio station is geared up for  “Mahisasur Mardini” and then preparations to head for one of the many ‘Ghats’ (river banks) where thousands gather for Torpon – A Hindu Ritual of paying homage to their ancestors.

Well, that is the typical way Mahalaya has been for the last 2 years for me. This year I missed visiting the ghats, but thanks to youtube, not the legendary voice 🙂

Presenting the 2nd post of the 4 post Durga Pujo special series – “Mahalaya  & Torpon – the colors of arrival” – the countdown for Bengal’s Biggest Festival – the one thing that unites bongs from all over the world in an epic  euphoric celebration of Good over the evil – Durga Pujo.[Find the 1st post of the series here]

When Karna died in the epic battle of Mahabharata, his soul transcended to heaven. There he was offered jewelry as food. Confused, Karna asked Indra for the reason of this bizarre offering.

Indra replied that because of the fact that he had never donated food to his ancestors in Shraddha, during his lifetime, he was getting such treatment. Karna justified that he was unaware of his ancestors and hence he had no chance of offering  food to them.

He was given a chance then to make amends.

He returned to earth for a 16 day period and performed Shraddha and offered  food in memory of his ancestors.

This period came to be known as Pitri-Paksha.

Mahalaya marks the end of Pitri-Paksha and start of the Devi-Paksha – when the Goddess Ma Durga along with her children, start their journey towards the mortal world.

On this day, thousands of people throng the Ganga ghats (banks of the Ganges) to offer prayers to their dead relatives or forefathers. Although, any male relative of the paternal branch of relatives can also perform the rites, It is primarily performed by an immediate male descendant of the deceased.

With so many ‘mantras’ a little note often comes handy 🙂

and sometimes, it’s often best to keep check of your belongings

This is also the day Artists at the Kumartuli start preparations for the final touches to the Goddess.

Although due to tight deadlines most idols are already finished up and ready to be moved to their destinations. A visit to Kumartuli and you can witness the rush and crowd, as Idols are being moved out of their studios, where they have been meticulously crafted for the past few months to their desired destinations, across various locations in the city.

Durga Pujo is now a handful days away 🙂

Stay connected for the upcoming posts, capturing the flavours of Durga Pujo across various locations of the City of Joy and beyond !!!