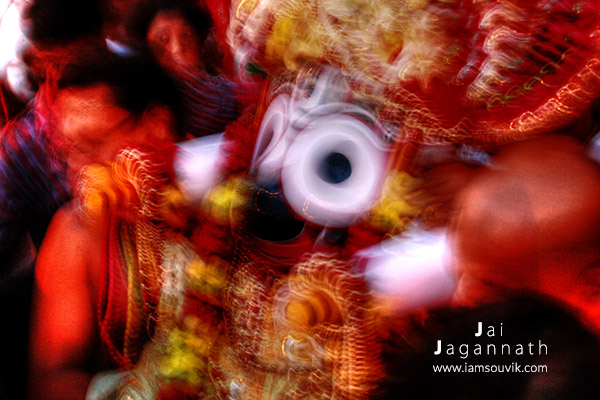 Experiences and Photographs from the 42nd Kolkata Rathyatra organised by ISKON. Also a handful of  last minute Tips for my photographer friends, so that they can avoid the mistakes I made 🙂

The Kolkata Rathyatra organized by International Society for Krishna Consciousness (ISKCON) is the Second Largest Rathyatra festival in the world, next only to the Rathyatra at Puri, Odisha ( Source: ISKON Website)

The Rathyatra, which was initiated almost 100 years back by Kolkata’s most illustrious saint  Srila Prabhupada, was organised in all its grandeur and magnificence for the first time in 1972.

Since then it has been a long 44 years that the Lord of the Universe, Lord Jagannath, descends every year on the streets of Kolkata along with his elder brother Lord Baladev and sister Subhadra Devi to bestow his blessings upon millions of people.

The 30ft high beautifully decorated chariot of the Lord is an exact replica of the one at Puri.

For the last few years, I always wanted to make a witness this energetic and enigmatic conglomeration of faith and devotion.

Finally in 2013, I had the chance to witness the 42nd Kolkata Rathyatra.

Irrespective of Age, Religion, Faith, Sex or Nationality a huge crowd had gathered at the point of inception – the Park Circus Maidan.

Check out the route map for the Rathyatra (source: ISKON Website)

Being inaugurated by the honorable Chief Minister of West Bengal, Mamata Banerjee along wth the presence of a few faces from the cine and music world, the Rath (Chariot) finally started its journey at around 1PM.

As usual during this time of the year, the rains did come – and so its better to be prepared well, especially if carrying a camera and accessories.

Slowly and steadily the Rath was pulled by thousands of devotees, preceded by a parade with various cultural and artistic displays.

Devotees decorated the roads with beautiful Alpanas ( Designs made of varied colours), dancing and chanting their way to the destination – the TAI Parade Grounds.

The journey is long and slow, but all along you will feel the enormous energy of the devotees – singing, dancing and celebrating the arrival of the Lord of the Universe.

Leaving you with a few more photographs from the day. But before that a few Quick Tips as promised.