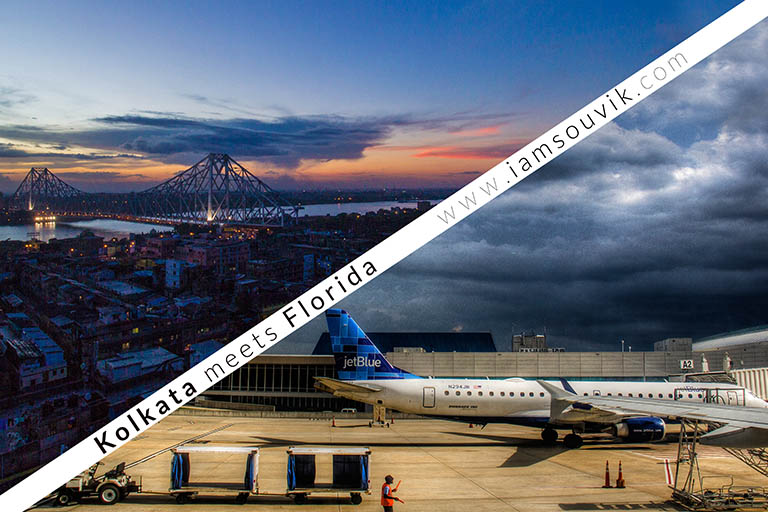 My journey from the City of Joy to the Sunshine State of Florida was a long and memorable one. It was also a journey of many Firsts.

My First International Travel – My First journey through numerous Time Zones – My first epic 14 hours flight ( a major chunk of the 30+ hours Journey) … to mention a few.

It has been a extremely busy week with lots and lots of official formalities and other personal work.

Accompanied by the fact that here you don’t get domestic help for doing your cooking or cleaning and every single work needs to be done on your own, I finally found time to sort, edit and write something up to share the experience of my travel from Kolkata to Florida via Abu Dhabi.

To start with, the total journey was of around 32 hours including the stop overs – The one at JF Kennedy International Airport being the longest ( 5 hours ).

As per  the flights were concerned, the journey from Kolkata to Abu Dhabi was the most comfortable and enjoyable while the one from Abu Dhabi to New York was a painfully long 13 hours of sitting at one corner of a 10 seats per row arrangement. The seats were no better than a domestic flight and the only comforting factor was the complementary on board meals 😛

Although most people prefer an alley seat during such flights, I could not miss this opportunity to get some Aerial Shots of  New York. I imagined something like those aerial shots shown in movies, flying over high rises and stuff like that :P.

Unfortunately something like that did not actually happen, but the end result was not disappointing as well. My choice of the window seats in all the three airlines proved rather fruitful 🙂

Enough of words, time for some photographs.

Starting with Abu Dhabi . The below photograph is taken seconds before touching town at Abu Dhabi Airport.

The flight from Abu Dhabi to New York was the longest in terms of duration. I could hardly manage some sleep and when I woke up early in the morning .. we were flying over the Atlantic Ocean – The Great Atlantic Ocean … and below me was another ocean of fluffy clouds.

A few hours later … the first sight of land.

And a few minutes later … we were flying over the city of New York – en route the JFK International Airport.

Here at JFK, it was one long wait for over 5 hours.  I also had to change terminals by taking the Air Train ( a mono Rail running between Terminals).

For over the next couple of hours I was exploring the shops, eateries, the terminal … occasionally sitting down for a break 🙁

Finally the wait was over and the boarding started. Being on time is a wonderful thing 🙂

Although I had checked in online for the previous two flights, this last one did not allow that. And so at the check in counter I had to spend some time negotiating with the concerned personal for a window seat. Thankfully only one was available, the last one 🙂

Look at those snake like bends !!! Aren’t they beautiful ??

This one was a short flight, roughly 2 hours.

One of the best things about the flights were the in flight WiFi connectivity allowing me to stay connected with friend and family even when thousands of feet above the ground.

As we approached Jacksonville, the pilot announced the presence of some turbulence and thundering clouds. And guess what, we were up for one big storm.

At the airport I was picked up by Dhrubajit and Megha. Although I had talked to Dhrubajit over phone a couple of times before arriving here this was actually the first time we were meeting. He had been here at Jax for quite some time now and in the next couple of days helped me with all the formalities and initial set up.

I wonder what I would have done with out all the guidance and advise.

We were running out of time. The storm was almost here and the sky was all dark filled with thundering clouds. Tiny drops of rain were all over the windshield.

It is the hurricane season here at Florida and at most places cyclones are a common phenomenon.

I was glad that finally the journey ended and I get to have some rest. The past 30 hours have been quite an experience.

I wonder how frequent flyers and Globetrotters  endure such long journeys  so frequently.