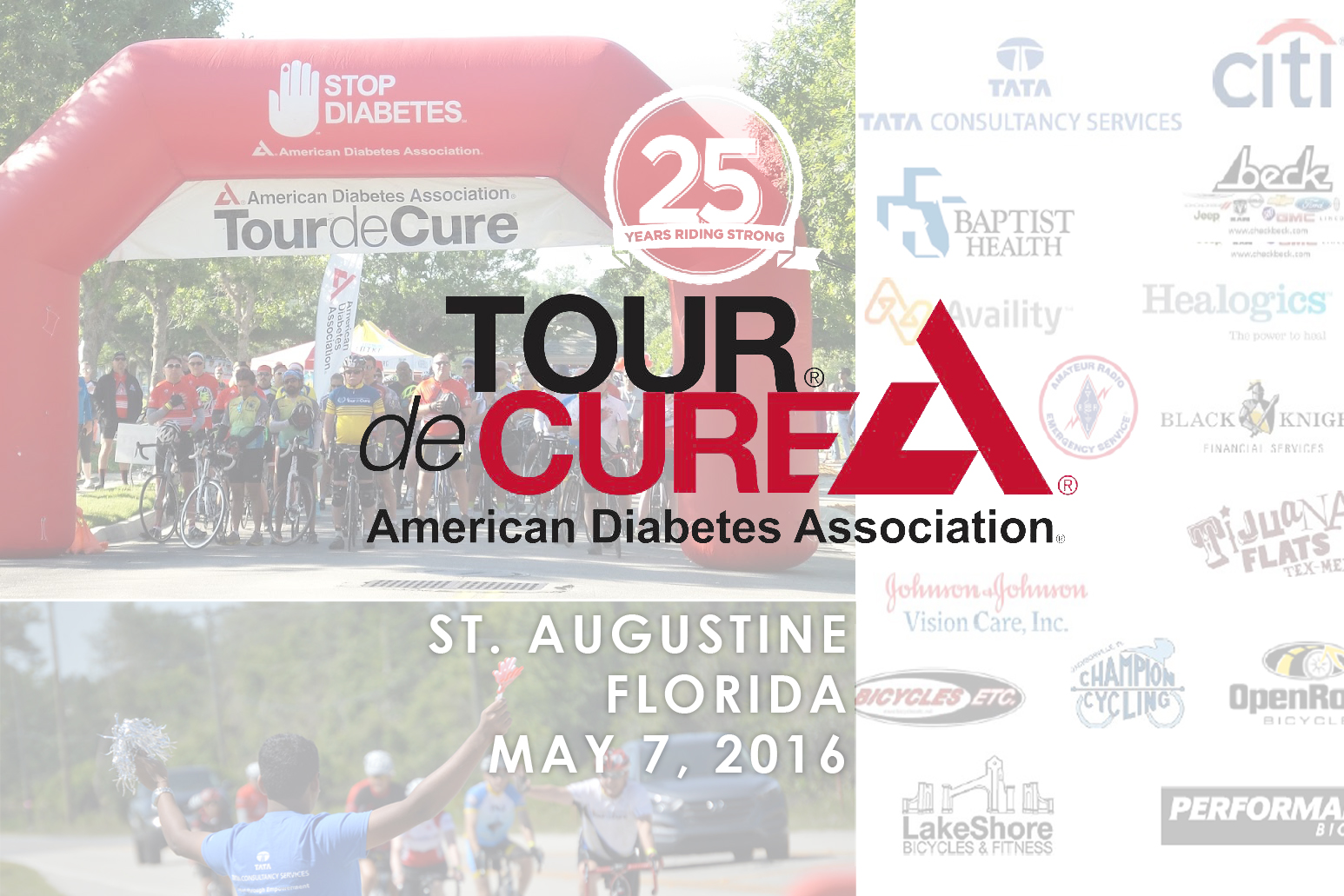 Unlike it’s close namesake Tour de France, Tour de Cure is a not a gruesome bicycle race , rather a ride to raise money for diabetes research.  In recent years it has gone from just a bicycling event to options like walking and running as well to include a wider participation.

Apart from participants the event also offers opportunity  for volunteers who set up refreshment stalls at rest stops, assist participants and help in the overall coordination of the event.

Tour de Cure is held nationwide across 40 states and each location’s routes are designed for everyone from the casual to the experienced cyclist, walker or runner. All the proceeds from the event goes to the American Diabetes Association.

In fact, Tour de Cure is the American Diabetes Association’s signature fundraising event with strong support from the business community in the form of sponsorship and corporate teams among many.

The Red Riders and the Red crew:

The 25th Anniversary Tour de Cure event organised at St. Augustine, Florida (~ 30 minutes  from Jacksonville) was held on May 7, 2016 and was a ride only event.

Tata Consultancy Services Limited (TCS) being the Gold sponsor for the 3rd consecutive year had a great participation with large team of riders as well as volunteers.

The 4 available route lengths of 5 miles, 41 miles, 66 miles and 102 miles made sure everyone could participate irrespective of their expertise levels. All Routes included rest stops with snacks and refreshments, technical support and medical volunteers.

Back in my school days it was kind of customary for me and my friend Rajkumar to spend at least one day of our weekend cycling, exploring new places on two wheels and human power. While in college, things got busy and I rarely got chance to take a ride. Eventually I sold my cycle as it was gathering dust and rust sitting on the veranda.

Its been a long time, but bicycling being an activity so close to my heart I decided to give another shot at it. The fact that I had joined the gym a couple of months back, gave some confidence about the route lengths I opted for – 41 miles (~ 66 Km).

I rented a mountain bike (bi-cycle) the previous day along with some accessories like Helmet, Gloves, knee and elbow pads. Safety is taken very seriously in such events and they have a strict ‘No Helmet, No Ride’ policy.

One of the prime reasons for choosing the 41 miles category was the group of friends who had also opted in. It is always refreshing to have good company in such long rides.

The ride was scheduled to start at 9am EST. We were there by 8.45 am and after a quick visit to the registration desk for some final formalities we were there at the start line.

Assembling my bike before the race (Photo: Myself)

The National Anthem being played before the start of the ride.

Team TCS in grey and red

Here’s the complete schedule for the event:

I was excited to be there, being part of such a National Event as well as nervous as it would be humiliating if I could not make it to the finish line.

The start was smooth, the weather was good and soothing.

An hour into the race, we had completed almost 10 miles. Me and my group of friends were the last one in our category as we could see the Broom Wagon trailing us. In case you are wondering what that is, a Broom Wagon is basically an official vehicle that follows the race, picking up riders who might abandon the race due to any reason.

1 more hour in to the race and the first setback. The other 3 friends who were riding alongside me opted out. They too were riding Mountain bikes and as we realized it was a major mistake like bringing a knife to a gunfight. Mountain bikes have wide tires made for gripping the road, most helpful when off-roading. The same qualities make it exceptionally hard to drive longer on smooth highways as it creates a lot of drag and uses up a lot of extra muscle power.

For rides like this always go for city bikes with thinner tires. Also having a padded bicycle trunk/shorts is most recommended. Pack in a small bag with some nutri-bars, Gatorades, sun screen lotion and a towel. They really come handy. I wish I had known these before the ride.

Well 2 hours into the race and I was now on my own. With no one to be seen within miles on either side, I was just following the road markers. It was almost noon and the Florida summer was starting to show its effect. Temperature was almost touching 95 degrees F (~ 35 Degrees C) coupled with humidity that reminds me of my own city. Almost out of my drink reserves, it was time to stop at the next refreshment stop, 3 miles ahead.

I still had 18 miles to finish line.

Time for a selfie

At the first Rest Stop, after 15 miles of biking (Photo: volunteer at the rest stop)

One more hour and I am slowly getting closer to the end line. So many times I was feeling like giving up but I kept visualizing the crowd waiting to cheer me up at the finish line, how exciting that would be to be able to ride my way to the end line instead of riding on a vehicle and that kept me going.

I realized the amount of physical and mental exhaustion pro riders go through. It was not the physical effort that was tiring me off, rather the solitude and loneliness of the surroundings that was taking a bigger toll on me.

4 hours and finally I am at the TCS tent. A bunch of known faces… ahh what a relief!! Many of them working in different teams and we hardly interact, but today they were the ones taking care of each and every rider who arrived there and they were doing a great job. Hats off to you guys.

I almost spent a good half an hour here. Chatting with other riders, posing with fellow riders from Team TCS as well as volunteers. It was inspiring to see senior members of TCS leadership actively participating in such events. They were truly leading from the front.

Time to resume, and from here its just 7 more miles. As I drove I passed by the same places I passed this morning, I had entered the last lap of the race.

The last 4 miles (Photo: myself)

Finally the moment I have been waiting for all this time, the moment of a lifetime, the moment I had been visualizing each time I felt like quitting, only time time it was really happening. People cheering and clapping as I cross the finish line along with a few others. One of the most fulfilling and inspiring moments, kind of felt like a celebrity waving back at the crowd.

Almost 2 o clock, I completed my ride of 41 miles in a little under 5 hours including breaks. The physical exhaustion seemed to be overridden by the triumph of been able to complete the circuit.

A quick Mexican lunch sponsored by Tijuana Flats and a few group photos later I could finally have my legs rest. I did not know what hurt more, my legs, back or shoulders. Whatever be , it was worth every bit of the pain.

All photographs in this post other than those explicitly mentioned, were taken by TCS volunteers. A special thank you to them for sharing the photographs with the team. If there is any concern regarding any image please feel free to contact me.

If you are interested to participate in a event near you, the below link would be useful.