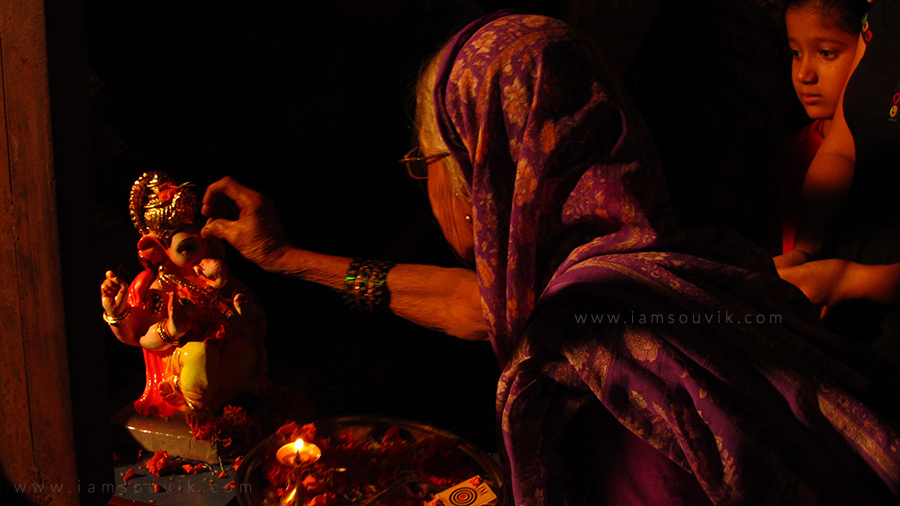 A first of a 3 posts series , It gives me a great pleasure to be able to share my experiences and photographs of Ganesh Chaturthi celebrations in Mumbai and Navi Mumbai. I hope you will enjoy it too !!!

Before He was a Lord He was the young and adorable son of Shiva and Parvati. But then He became the Lord of all Living things … how ???

Ganesha (guh-NAY-shuh) became Lord, when he beat his brother, Karttikeya, in a race around the universe. Instead of bolting across the Earth like his brother did, Ganesha simply circled his parents – the source of life – to win the Race.

It was quite unfortunate that Lord Shiva unable to identify a playful Ganesha covered in dirt beheaded his own son only to have it replaced later by that of an elephant.

But  owing to this mishap – Ganesha was granted a very special gift to make up for the fact that He had an elephant head. No one would ever start an important endeavor or religious rituals without seeking His blessings !!!

As mentioned in my previous post on Dahi Handi – I couldn’t have asked for a better time to be in Mumbai.

Although Ganesh Chaturthi is celebrated widely across the country, in Maharasthra and Mumbai in Particular  it seen in its most extravagant and grandeur form.

I resided at Koparkhairane during my stay at Navi Mumbai. The place had a set of resemblances with  a typical North Kolkata locality with lanes and bylanes, densely packed buildings and decently crowded.

There was also this small idol workshop and with Ganesh Chaturthi only a week away every moment was vital. But surprisingly as I approached to photograph the artist finishing an idol – he was very cooperative and in fact happy at the fact that I showed interest in his art.

He even took me to his backyard where dozens of finished idols were ready for devotees to purchase.

On our way home from office, there were countless small pandals with idols from a few inches to a few feet, they came in a variety of sizes and color. All the lanes and by-lanes were flooded with lights – No room for darkness 🙂

There was this mall a few minutes away from our office where this beautiful sleeping Ganesha was crafted out of sand – Beautiful isn’t it?

Our locality also had a small pandal  to celebrate this auspicious occasion. Sitting in our room we could hear the bands and the crowd cheering. The idol was being brought in to be placed at the Pandal. I rushed down with my camera – the same Canon SX210IS I used for capturing Dahi Handi a few weeks back.

People of all age groups and gender had come out to get a glimpse of the lord, when out of the crowd this old lady came out to worship the Lord and accept His blessings.

Meanwhile back in My City of Joy – the city prepares to celebrate the festival with utmost enthusiasm, zeal and devotion.

By the way … this is just the start … 2 more posts to go – one on Mumbai’s most famous Sarbajanik Ganpati – the Lalbaucha Raja and then finally the Ganpati Bisarjans at the Girgaon Chowpatty on Marine Drive. Trust me you wouldn’t want to miss them