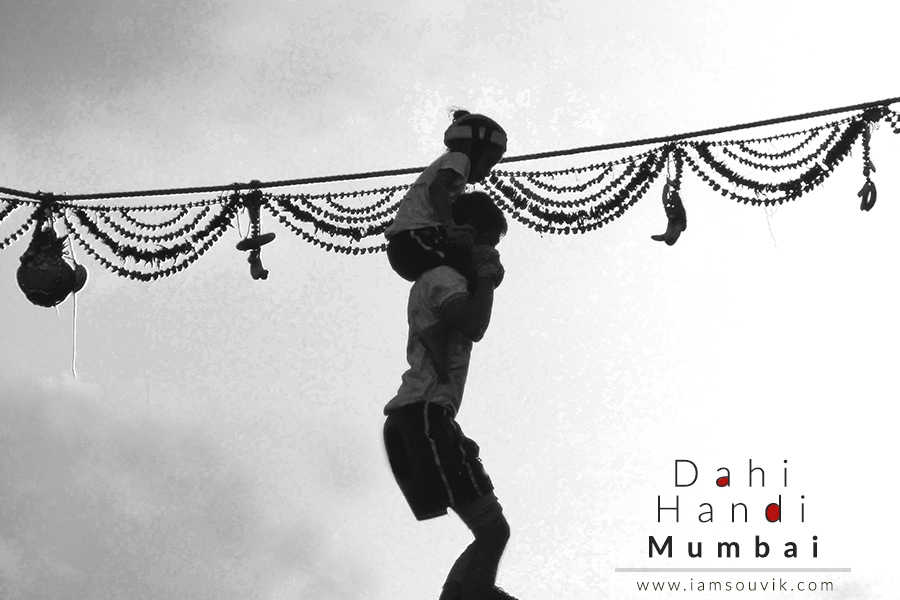 Experiences from my witnessing the Dahi Handi Celebrations in Navi Mumbai, back in 2010 . This is the First Post where the photographs and videos are entirely shot with a Point and Shoot Camera. This is also the first post where I have included videos (Please watch the videos in HD)so that you just don’t read about  or see the action, but also feel it. Let’s get started !!!

“Dahi Handi” or the pot of yogurt festival (Dahi: yogurt. Handi: pot) is widely celebrated across Maharashtra as the entire nation celebrates Janmastami ( also known as Gokulashtami) – the Birthday of Lord Krishna.

The festival adds that unique flavor to Mumbai during Janmastami and attracts thousands of devotees, tourists, photographers and enthusiasts, who come here to witness this energetic and enigmatic conglomeration of faith and devotion.

Legend has it – Lord Krishna along with his playmates stole butter from the pots hung high to the ceilings by forming the human pyramid.

Based on the same legendary story,  the Govindas or GovindaPathaks ( as the participants in the Dahi Handi Festival are locally known as) form human pyramids that often reaches heights of up to staggering 45-50ft (or more) and attempt to break the Handi (pot – full of curd, butter, fruits and nuts)

It was 2010 and I was in Mumbai for an official assignment. I reached Mumbai towards the end of July. The festival was scheduled for September 2.

Although I was aware of Mumbai being famous for its Janmastami and Ganesh Chaturthi celebrations, back then I did not have much idea about the event – locations or timings. The ‘Best’ thing – neither  did I have a camera nor much knowledge about photography. The Rule of the thirds, composition, lighting, framing – were terms I was completely unaware of.

After consulting numerous websites and a few friends who were into photography, I had to make a choice – Go for a SLR with a single kit lens or a Expensive point and shoot with High Zoom and portability ( Leave aside the eternal Canon-Nikon debate)

I ended up with the Canon Powershot SX210IS – 14 MP and 14X zoom – yet would easily slip in the pocket of your trouser.

Getting back to the festival – Dahi Handi takes place at numerous locations across the City. But being a weekday with no holiday, I had to find the nearest location (so that I could experience the event post office) and so ended up at the one happening near D mart at Koparkhairane.

What I figured out was – there were 2 categories for the Dahi Handi event – an amateur and a professional. The Amateurs did not attempt to break the Handi, it was more of a who could build the highest tower.

While the professionals spend the whole day travelling across various event locations attempting to break the handi and claim the rewards, which at times may go up to quite a few lakhs, depending on the organizers and sponsors.

6-60 years , age was just a number for these fearless daredevils.

With each level of the tower rose to great heights and with one little mistake things could go terribly wrong – Like the one below.

But then, with great heights comes great rewards – leave aside the cash – it’s more of honor and glory for these adrenaline junkies.

And sometimes, you get to watch miraculous saves like this one (Caution: Don’t blink after 30 seconds into the video or you might miss the action)

Before I conclude,  just want to share a funny incident :

To avoid the crowd and get a better view of the event, I walked into an adjacent  restaurant and occupied the window table. I ordered a soup just to remain seated  and have my photographs and videos – the view was relatively better.

But after an hour the manager walked up to me and asked me to order something if I wanted to keep the seat occupied.

For the next 4 hours, I kept ordering something or the other – sometimes a chat or a tea  – a small ‘top up’ to keep my seat ‘Active’ .

I never went to the restaurant again 😛

With Janmastami and Dahi Handi over and Ganesh Chaturthi due in a couple of weeks, looks like I landed in Mumbai just at the right time …. Jai Shri Krishna 🙂

Stay tuned for the post on Ganesh Chaturthi which should be here in a couple of days.