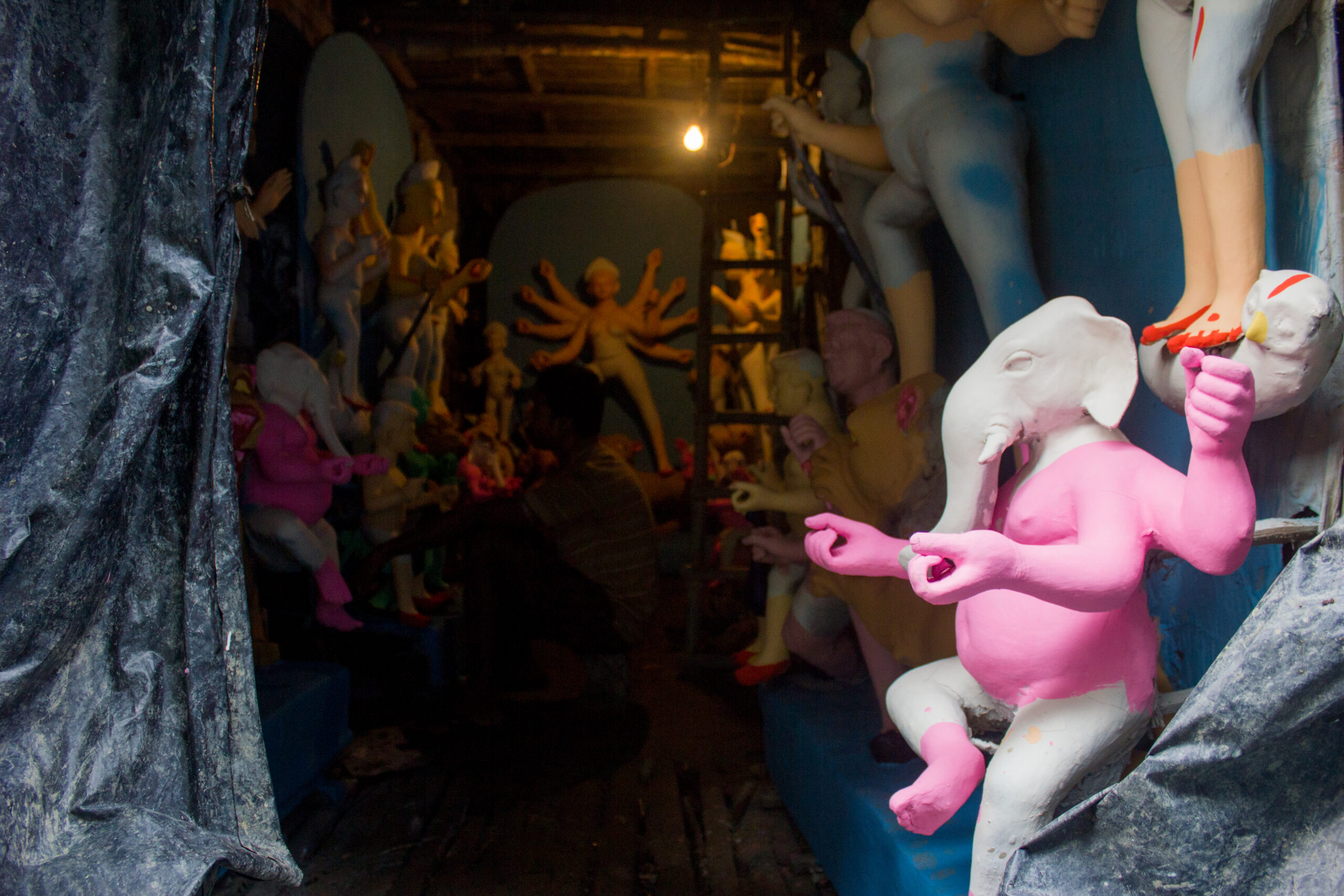 Devi Durga – the principle form of the Goddess, a symbol of power, affection and victory of good over the bad might have been created in the Heavens with special powers from multiple Gods to defeat the notorious Mahisasura (the Buffalo Demon)

But Ma Durga – who resides in every Bong’s heart, no matter in which part of the world they are, is  crafted with great care and affection by mere mortals residing in the narrow lanes and by lanes of one of Kolkata’s oldest and largest clay art ‘studio’ – Kumartuli (the potter’s quarter)

The Durga Puja – Bengal’s biggest festival is only days away and for the 300 plus artisans at Kumartuli, they have hardly any time to rest – preparing to provide the final touches to the idols that will be either  shipped across seven seas to various countries or may find a place in one of the cities hundred odd Pandals.

Visiting Kumartuli multiple times during this part of the year is like a ritual, trying to capture the various stages of creation – as the skilled artisans, most of them into idol making for generations, craft the Gods and Demons with equal passion and love.

Through this post and photographs I have tried to capture the very essence and joy of creation, the associated hurdles and passion that comes into play during the entire process.

Starting with mere Bamboo and Hay to create the ‘skeleton’ and the ‘Flesh’ respectively, the ‘skin’  – crafted out of a blend of multiple clay types (Primarily the sticky ‘entel maati’ and the finer ‘bele maati’), comes at a later stage.

Like the potters of Ghurni, most of the craftsman here have the surname of Pal/Paul.[ You can Read about the craftsmen of Ghurni – world famous for its clay dolls – Here ]

At times you can find multiple generations working under the same roof, not necessarily crafting idols but accessories like ornaments and decorative pieces.

The narrow by-lanes of Kumartuli might look claustrophobic, but as you pass through rows of idols, the feeling is liberating 🙂

With extreme schedules and tight deadlines, for the artisans their studio becomes the home – cooking and resting here itself.

and then there is always the ‘What’s Trending’ – always trying to catch up to the latest and trending designs.

So are you ready to dive in to the madness and euphoria – we call Durga Puja. Well if you are not yet, you better be – it’s Pujo time !!!